We all have a lot on our minds these days. There are  a million things to do and places to go. So much that happens is out of our control. Just look at a newspaper or listen to the radio. Media of all sorts is reminding us of how scared we should be that everything is changing.

Well I have decided to embrace the fact that change is constant. Change reminds me that I am alive. No today is not the same as yesterday even if I am doing many of the same things that I did yesterday. Every day is a new opportunity- to do a lot or to do a little. 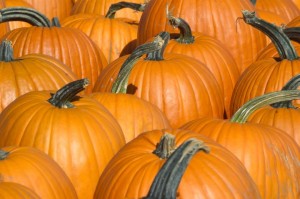 Accepting the reality that change is constant has been good for me. I am realizing that change will happen no matter what I do or don’t do so I don’t have to feel bad or sad about it. I can control what I can and when I can’t, accept it. This isn’t an original idea by any means but it seems more true to me now than it ever has. Maybe it is the season or watching the leaves change, my kittens grow, or the 20 tomatoes I just discovered growing in my garden today. Who knew that just before an October snow storm I would suddenly have this crop of tomatoes that I can’t pick?

I can’t control time or change but I can look at both with renewed enthusiasm. I am grateful for happy surprises and joyful times. I can even provide some of them. My most important lesson has been to enjoy and accept both when they come my way and to “take” the time to do so….

Today is almost the last day of breast cancer awareness month. I have a lot to say on the subject and I’m a survivor. I won’t do a post on it today but through my daughter Kimba  http://kimbas2cents.blogspot.com/  and our good friend Marilyn http://theartsygirlconnection.blogspot.com/  you can watch  two different video’s featuring me and one of my projects. Please take a look, they have wonderful, positive and fun sites. Enjoy the change of scenery!

I still use film on a regular basis, but of course enjoy digital photograph as well for other purposes. I have used more and more film after using digital photography for a couple of years, because film still adds certain qualities to my work that I like (this is my way of not saying “digital is better than film” or vice versa). I will write some other time for which situations I prefer digital photography, and for which film photography is better suited in my opinion.

Younger generations of photographers have never used film. In my experience, using film does enhance photographic awareness and leads to a more contemplative style. When I shoot film, I take more time composing photos, whereas with digital photography I shoot quick bursts of images that take me a while later on the computer to sort out (which of the four very similar compositions do I like the best?). Specific reasons why I think film photography is still important and will not disappear are:

Photographic materials available today provide us with unlimited possibilities, no matter whether film or digital photography is utilized. Both recording media have their place. In the end, it is information that is recorded, whether on a digital sensor or film. It is a great time to be involved in photography, because we have so many options and materials available.

Thank you for reading! 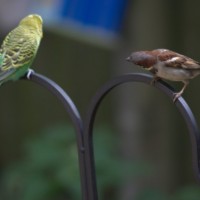 I love animals. I’m not a hoarder but I am a feeder of birds and wild life that routinely come through my yard. OK, I also will feed if an animal if is in distress.

This summer I had the pleasure of seeing all sorts of birds including the budgie that you see in the photo. When, he stopped visiting the feeders in late August, I was sad but figured he had moved on. Imagine my surprise when I visited our local zoo a couple of weeks ago and saw that they have a budgie exhibit featuring more than one hundred budgies! One of the zoo workers was outside the exhibit and I asked if they had any strays. She said normally, no but at the end of this summer they had a budgie show up that was banded. They quaranteened it and kept it. I don’t know if my friend is in there but I feel a whole lot better about the situation.

On a sadder note, I tried to save an injured sparrow last week. He seemed to have a broken leg and was on the ground trying to fly. I put in him a cage with the grass and leaves that I found him on. At first I left him on the porch to rest but squirrels and a neighborhood cat looked a little too interested so I ended up bringing him in the house. He kept taking naps. When I gave him water and seeds he ate the seeds. I covered the cage and he settled down. An hour or two later, I let him out in a bush in my front yard.

I went into my backyard to start some chores and he was back there on the ground near a tree. That wasn’t good so I caught him again and brought him back into the house. I intended to let him out in a couple of hours but by the time I planned to let him go- all of the other birds were gone. He didn’t tweet but tried to fly a couple of times.

I decided to keep him over night and let him out when the other birds were out. My husband indulged me and luckily he checked the cage in the morning before I got to it. My sparrow didn’t make it. I don’t know what touched me so much about that little bird but I cried most of the day.

It’s ironic because I have spent most of my professional life trying to fix the problems of the world. I never believed that I would solve any social justice problem on my own but I know that any effort to do good in the world and no harm to others is worth it. In order to do that kind of work, I often turned off what I was feeling (fear, disgust,anger and the like) in order to get the work done. Even I am surprised by the level of emotion a tiny bird raised in me.

I was sorry about the loss of that little bird. What I am grateful for is the love and emotion that I still have in me. I can’t help it and I don’t want to.

Tell someone you love them…

Recently during a rainy afternoon I challenged myself to find some interesting textures and details in our living room. The following gallery shows the result.

A while ago I posted some plant photographs. Since then, I have revisited our backyard and found some more interesting plant details.

The new stove is in and cooking is even more of a pleasure. I told you that I would share the recipe for the first meal that I cooked on the stove. I cooked stuffed shells and made a tomato sauce from scratch (but you can use a prepared sauce.)

Sauce:  Chop and saute 3 cloves of garlic, 1/4 onion in a tablespoon or so of olive oil with a teaspoon of butter until translucent. Add chopped mushrooms and whole cherry tomatoes. There will be a good amount of liquid from the mushrooms and tomatoes- don’t pour it out! Add tomato paste, sugar and a about a cup and 1/2 of water. Include salt, pepper and some of the dried herbs to taste. Simmer until tomatoes have broken down and sauce bubbles mildly. This usually takes about 45 minutes. Pour enough of the sauce to cover bottom of ovenproof dish.

If you decide to use prepared sauce, pour some in bottom of oven proof dish. You can enhance the flavor by sauteing some mushrooms and onions in olive oil and then add those to the sauce. 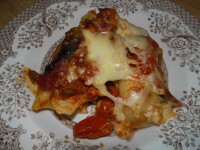 a serving of stuffed shells 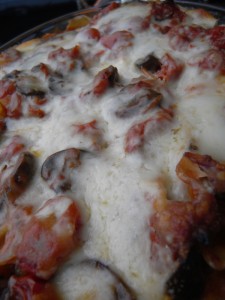 When you are finished enjoying your meal, visit our friend Marilyn
at http://theartsygirlconnection.blogspot.com/   and daughter Kimba at http://kimbas2cents.blogspot.com/    they have a great link- up going on. You are invited to participate! 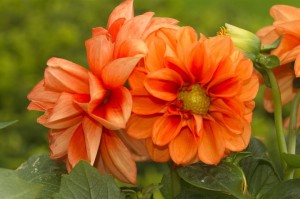 Recently, I spent a Saturday evening with my daughter. She made a wonderful dinner and then we watched one of my favorite movies, “To Sir, with love.” For those who do not know the story it is about an unemployed engineer who manages to get a job teaching at a lowly resourced school in England. It is the early 1960’s. He is single, handsome and black. All of these attributes are essential to the story and to me, the outcome of the story is inspirational. The teens start out hating him. They learn life lessons from him and eventually respect and love him. This movie has inspired many to become teachers.

I told my daughter that it seems that there are a number of movies that prove to be inspirational to people and make them want to work in the field that the star of the film is employed in. I could easily think of several of these:
To Sir with love- teacher
The Miracle Worker- teacher
To Kill a Mockingbird- lawyer
I get such wonderful feelings from movies like these and I have taught and worked in the legal field. How about you? Is there a movie that you enjoy that made you consider a field of employment even if you didn’t go into it?
File this musing under shared experiences…

Especially when food is involved!

Last week I was sad and alarmed that my stove had finally conked out. It’s not like you can just run out and buy a new one. I first had to attempt to revive it by calling in a professional. The service person was kind and told me the repairs would cost almost $300 (this is the same person who told me that I must cook a lot and was shocked to find that I cook dinner most days.)

After the $65 service call, Lars and I decided to look on-line and then visit a couple of stores to see for ourselves what is being offered out there. I wasn’t very impressed with what we saw and I was annoyed they were all so expensive. Fortunately our last stop was the winner because this is where I found my gift: A Bosch series 300.

I say gift because I was planning on a repeat of what I had before a basic white stove that is cheap, blends in, and does the job.  I was totally surprised when my husband told me to pick the one I wanted! He said that my eyes lit up when I looked at the Bosch. They lit up alright (just like a Christmas tree) and probably stuck out too. I’m in love- with my husband and my stove. I know that I’m drooling and I promise to stop. In my next post I’ll show you what my first meal was. Thanks for putting up with me. That goes for my husband too!

Well friends, the new stove is in and here she is: 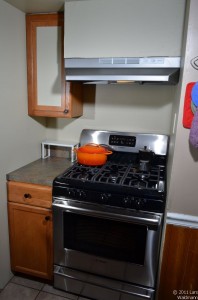