I know that it has been a while since I have written anything here. I have been busy with any number of projects but that is no excuse. I write in this space because an issue is of interest to me or because something has happened and there is no one near to talk to me about it and writing allows me to get ideas out. I don’t know who reads our blog or looks at the photos or jewelry unless they drop me a note or purchase something.

I keep writing because I hope that by doing so, I will learn more about myself  or perhaps the story that I share will add something of value to your life. It happens to me all the time when I read other people’s web sites. I learn something or laugh or smile because of what they shared. I hope that I have that same impact when someone sees our site. With that long introduction, here is another story that you may be able to relate to…

A few days ago a cute kid was walking by my house carrying a cat that was too big for her to be carrying. I asked her where she found it and she said that she found it down the street in a park (the park is about five blocks from my house.)  She also said that she was taking it home to be with her other cat. This cat was beautiful. He was a very dark gray with deep orange eyes. The girl and I exchanged a few more words and she headed off happily squeezing the cat and enjoying herself. I later told my husband that the cat would probably end up walking itself back home to the park because who could take all that squeezing!

The next day as I cleaned my front yard I thought I heard a meow but I didn’t see a cat. I admit that I am obsessed with all things kitty like and I can’t even tell you how much I love Tigers but I was sure that I was not imagining the meow. I scanned the yard and made eye contact with the cat from the day before! He ran to me and rubbed my legs. He had me at “meow.”   I fed him!

The details of this story go on for three more days so let me give you an abridged version: The kid came over everyday looking for the cat, carrying it around, bringing it food and basically “loving” it to death. He started running away when he saw her coming.
I spoke to her about it a number of times and could not convince her to leave him alone until the third day he was in the yard.

My husband and I came home late in the evening from an after work dinner. The cat that I had begun to call Smokey was sitting on my front porch in a position that was weird even for a cat. He didn’t get up when we approached the step but he meowed and stretched out his head to be scratched. We checked him out and he behaved as though his rear right leg was hurt. After a brief discussion, my husband and I put him in a box with a blanket he had slept on and took him to the Massachusetts Society for the Prevention of Cruelty for Animals.

I went through a number of emotions as all of this happened. At first I was angry at the child because I was pretty sure that she was the one that hurt him. Next, I was upset with myself for engaging with this cat because I know that if you risk liking or loving someone you also risk being hurt. Listen, I do not live for pain but I understand its importance in life- balance. I try to avoid emotional pain but I accept it because it proves to me that I am alive and able to like and love. 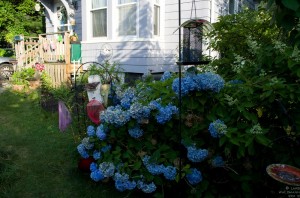 Don’t worry, I got over being mad at the kid right after I realized that the cat had a much better chance of getting a “forever” home as a guest of that shelter than running around feral in my neighborhood. I also realized that I would never have taken him to the shelter if he wasn’t hurt.

I cried my eyes out that night and when I saw the kid a few days later, I explained that the cat was hurt and that I gave him away so he could have a good home. She said that that was sad and that she was sad and I told her that I understand completely and I do. Now that I am on the other side of this situation I realize that it turned out best for all involved. It is a pain I can live with.